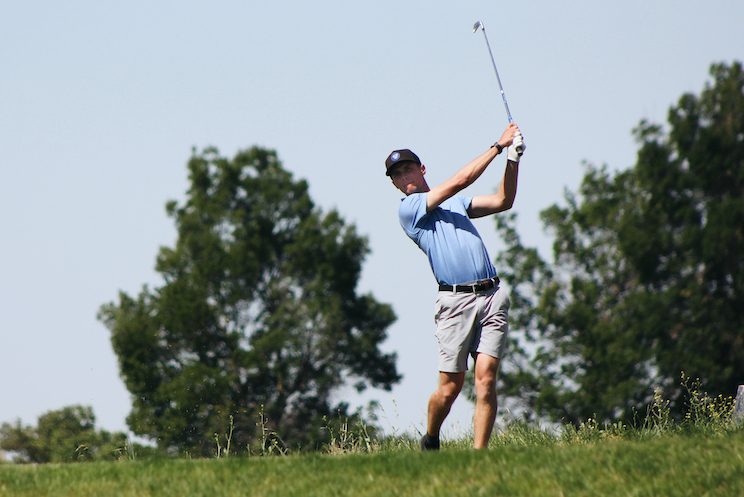 Brigham Young University senior David Timmins used an eagle on his first hole of the day to re-hit an eventual 63 at the Denver Country Club. He leads by a stroke over Jiri Zuksa after day one of the Trans-Miss Amateur Championship.

Timmins, a native of Sandy, Utah, made two on the par-4 10th, then quickly bugged the next hole. Although it would be the last blot on his scorecard for the rest of the day, the fifth-year senior would string together six birdies on the nearly 7,000-yard par 70 just outside of downtown Denver, At. Colorado.

“I stuck to my game plan that I devised in my practice round and I stayed diligent in my club selection off the tee,” Timmons told the Trans-Miss Golf Association.

Zuksa, a rising senior at Louisville, also worked an eagle in his first round, but did so later in the day. His par-5 3 on the 13th highlighted a wild inside nine that included just two pars and resulted in a 29.

The Czech Republic native was part of the afternoon wave that dealt with Denver’s typical summer weather. Thunderstorms rolled out of the Front Range, bringing lightning to the area which delayed play twice.

One group failed to finish before dark and will exit at 7:30 am to complete their final hole. The second round will begin with tee times at 8:00 a.m.

Six players are tied for third at 5 under, including recent Dogwood Invitational winner Carson Bacha.

Denver local and Colorado State junior Connor Jones posted 29 on the front side — his back nine — leading to a 5-under 65 and a berth among the half-dozen players tied for third place.

The field will be reduced to the top 54 and tied after Thursday’s second round. Currently, 47 players are in red numbers and another 22 are at even 70.

Defending champion Derek Hitchner is one of those 47-under-par competitors after shooting 69 on Wednesday. The Pepperdine Golfer is six back and two in the cut line.

Denver Country Club, the oldest club west of the Mississippi, has hosted six previous Trans-Miss Championships throughout the club’s distinguished history, most recently in 2010 when Scott Pinckney won the tournament’s first rendition since moving to a 72-hole stroke play tournament. Over 80 club members volunteer for the event providing hospitality, scouting and championship points.

See the results for the Trans-Miss Championship

The Trans-Miss is one of the oldest and most famous golf tournaments in the United States. For 106 years, the championship was played in match play. Past champions include Jack Nicklaus (1958 and 1959), Charles Coe (1947, 1949, 1952 and 1956), Deane Beman (1960), George Archer (1963), Ben Crenshaw (1972), Gary Koch (1973), Bob Tway (1978), Mark Brooks (1978) and other professional touring notables. In 1987 the championship was changed to a middle amateur age requirement, and a senior division was also added. Beginning in 2010, the Trans-Mississippi Championship returned to its roots as an open amateur tournament and immediately established itself as a “must-play” among top college and mid-am players, while shifting to a format 72-hole stroke play. . Field size starts at 144 players from member clubs of the Trans-Mississippi Golf Association (or players receiving a special invitation from the Championship Committee). After 36 holes, a cut is made to the low 54 and ties that play the last two rounds.