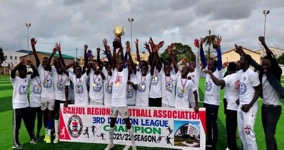 Banjul side TMT have qualified for next season’s league second division football after earning a superior four goal difference.

TMT played to a 2-2 draw against Brikama-based side Berewuleng FC for the first time in a game played at Late Ousman Saho Football Ground in Old Yundum on Tuesday, September 6, 2022.

They played out another 2-2 draw against Universal Sporting Boys in their second home playoff game on Friday, September 9, 2022.

Universal Sporting Boys and Berewuleng FC also drew their two playoff matches but were unable to qualify due to goal difference against TMT.

They finished with 2 points each. However, TMT FC scored 4 goals while Universal Sporting Boys and Berewuleng scored 2 goals each. Therefore, TMT FC with its superior goal margin qualifies for the National League Second Division.

“The trip was not easy. We always tried to impose our style – playing with a high line and finally we got the results. We have a good team spirit here and we stuck together and showed great patience and support for each other. Success is a difficult measure and not a simple task. We have always promised our fans to do our best to qualify for the domestic league, here we are,” TMT FC said on its official Facebook page.

“Success, many of you know, is never easy but always achievable. However, our progress will continue. A lot has been done and there is still a lot to do. TMT will remain committed, focused, strong and above all together “, added the message.