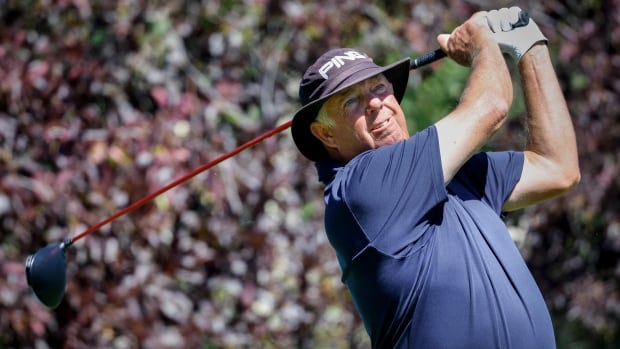 A day after shooting 65 at the Shaw Charity Classic, Kirk Triplett followed that up with a round of 68 at Canyon Meadows Golf and Country Club on Saturday.

Heading into the final round of Sunday’s 54-hole PGA Champions Tour event, Triplett sits in the top spot at 7 under, just one stroke ahead of Jerry Kelly and Paul Goydos.

After carding a round 67, World Golf Hall of Famer Vijay Singh sits alone in fourth place at 5 under, just one stroke ahead of first-round leader Padraig Harrington with Dean Wilson, Alex Cejka and John Huston .

Kevin Sutherland had a best round of 5 under 65 on Saturday to tie for ninth at 3 under with Shane Bertsch.

McLean and Weir lead the way for Canada

After a tied round of 70, Alan McLean of London, Ont., is tied at five for 11th at 2 under with a group that includes defending champion Doug Barron.

After going 1-under 69, Mike Weir of Brights Grove, Ont., is part of a 10-man stalemate tied for 16th at 1-under for the tournament.

Canadian Golf Hall of Famer Stephen Ames, a former Calgary resident, was powerless in his round and shot 73 to tie him back for 47th at 2 over.

Although David Morland IV, who hails from Aurora, Ont., had a respectable 2-under round at 68, he is far behind the leaders at 3-over.

Meanwhile, Dennis Hendershott of Brantford, Ont., had a tough afternoon and shot 81. He’s second to last overall at 11 over.