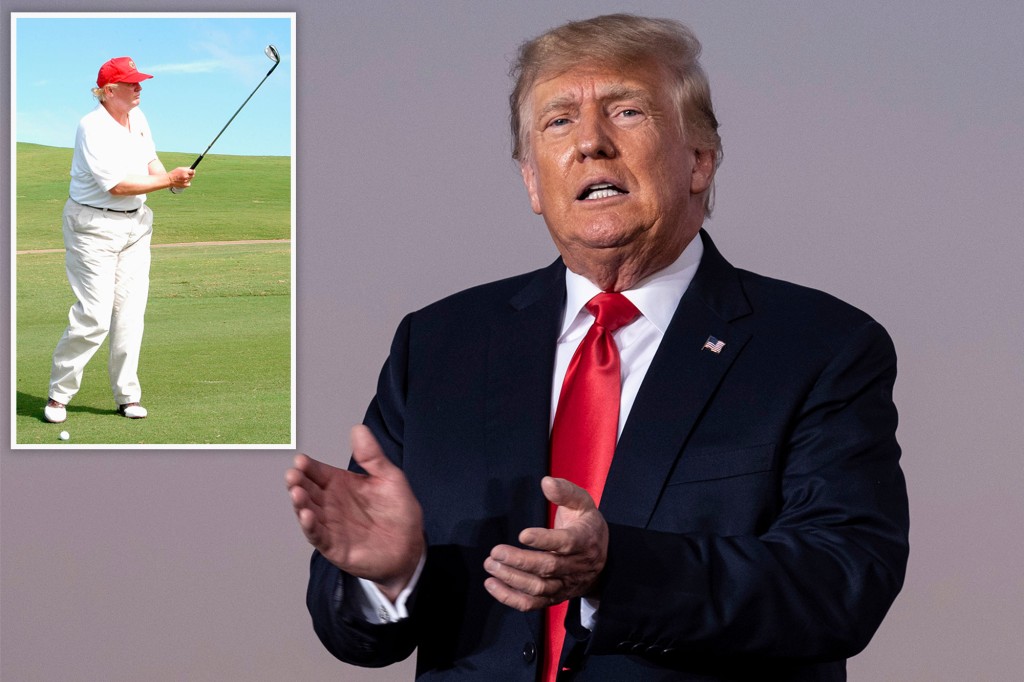 Former President Donald Trump claimed on Monday that he scored a hole-in-one while playing golf with a number of pros at his Florida golf club.

Trump, 75, released a statement detailing the alleged ace on the 181-yard 7th hole at his Trump International Golf Club in West Palm Beach. The former president said he was playing with professional golfers Ernie Els, Gene Sauers, Ken Duke and Mike Goodes when he shot.

“A lot of people ask, so I’m going to give it to you now, it’s 100% true,” Trump said of the hole-in-one, without specifying when it happened.

Trump spokesman Taylor Budowich tweeted a video showing the aftermath of the shot, with the former president recovering the ball from the cup.

“I hit a 5 iron, which sailed beautifully in fairly strong wind, with about 5 feet of cut, after which it bounced twice and then went away rattlingin the hole,” Trump explained.

“These great players on the tour noticed it before me because their eyes are slightly better, but on this one hole only, their swings weren’t,” the former president continued.

“I won’t tell you who won because I’m a very modest person, and you’ll say I was bragging – and I don’t like people who brag!”

Trump visited golf courses – almost all of his own – about 298 times during his four-year term, according to the TrumpGolfCount website, which followed his outings. During those visits, he golfed at least 150 times, according to the website.

He has also been accused of rigging his prowess on the course, according to sportswriter Rick Reilly who detailed numerous accusations of cheating against the real estate mogul from professional and amateur golfers in his 2019 book “Commander in Cheat: How Golf Explains Trump”.

“If Trump is a 2.8 [handicap]“Queen Elizabeth is a pole vaulter,” wrote Reilly.