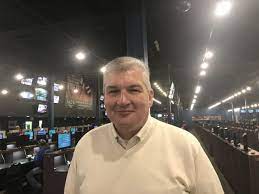 Chip Bach, General Manager of Turfway Park/Newport Racing and Gaming, will be the guest speaker at the final induction meeting of the year into the Northern Kentucky Sports Hall of Fame on Wednesday, April 20.

In making the announcement, Joe Brennan, president of the organization, said five new inductees will be added to the Hall on that date.

The meeting — open to the public free of charge — is scheduled for the Arbor Room in Park Hills Gardens (1622 Dixie Highway) at 1 p.m.

Bach held management positions at the Florence track for more than 20 years and served as operations manager before his appointment as general manager on November 29, 2012.

Bach joined Turfway in 1999 as Director of Human Resources and Safety, where he developed and implemented the track’s continuous customer service improvement program. In this role, he also developed the equine industry standard protocol for communications and response to high-risk infectious diseases.

In 2006, he was named Director of Operations and assumed oversight of all day-to-day activities at the track, including racing, insurance, admissions, facilities, grounds, customer service and customer relations. The knights.

The April inductees are:

Steve Simon – The Silver Grove High School alum was a four-year rookie in baseball and basketball – and was named an All-Conference in 1967.

He attended Brewton-Parker Junior College and made the state basketball finals – and was named to the All-Tournament team. He then signed with Piedmont College, played two years of basketball and three years of baseball where he was named an All-NAIA, and was an All-District 25 third baseman.

Ray Arnold – The 1995 Boone County High graduate was a member of the 18th-ranked football team in the nation by USA Today.

He was named All-Northern Kentucky, All-Conference, All Tri-State, and Honorable Mention All-State. He was considered the best defensive end in the state and was named Buddy LaRosa Player of the Week three times.

He started four years at Western Kentucky University and was named a preseason All-American before his senior year. The 6-foot-2, 315-pounder ran the 40-yard sprint in 4.85 seconds and benched 225 pounds 28 times. A season-ending injury in the fourth game of his senior season ended his career.

David Peru – Running back at Dixie Heights High School, he turned his passion to golf. He has been a junior golf instructor since 2006 and has coached elementary and recreational basketball for the past four years.

His golf career included stints at World of Golf in Florence as General Manager/Superintendent from 2001-2014. He was General Manager of Devou Park Golf Course in Covington (2014-19) and Kenton County ( 2020-present).

Golf is where he made his mark. He became Assistant Pro at the AJ Jolly Golf Course, a position he has held for 27 years.

He was then hired by David Bay to help revive the failed Pendleton County Country Club. Bay said he saw Steve’s leadership skills, work ethic and ability to bring golfers/customers to the club – that’s when Bay said he made the investment of 1.4 million dollars to buy the club.

Cunningham was instrumental in creating this golf course, the Course of the Year by Cincinnati Magazine., in 2020.

Larry Rose – The 1970 Dayton, Ky., high school graduate was a three-year-old basketball rookie – he averaged 22 points per game as a senior.

As a baseball starter for three years – he was the only left-hander on the team – he was an All-Conference selection. He played for legendary Northern Kentucky State (now University of Northern Kentucky) coach Bill Akers. As a pitcher, his ERA never exceeded 3,000 in his entire three-year college career.

He was a basketball referee for 39 seasons.