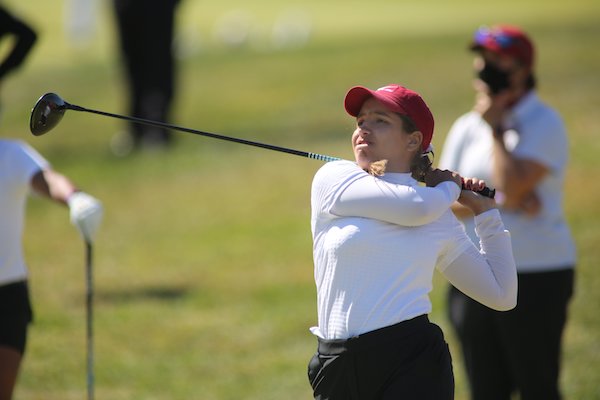 Led by regular play from Ela Anacona, the No. 20 University of Arkansas women’s golf team got off to a strong start Monday at the NCAA Ann Arbor (Mich.) Regional.

Anacona shot a 2-under 69 to tie for the first-round lead, and the Razorbacks shot a 7-over 291 to take a two-stroke lead on the 6,265-yard, par-71 course at the golf course in the University of Michigan.

Anacona, a junior from Buenos Aires, Argentina, led the field with 16 pars and birdied at numbers 13 and 7 for the Razorbacks, who started at number 10. Anacona is tied with Jana Melichova of Old Dominion, one shot ahead of San Jose State’s Natasha Andrea Oon and Washington’s Stefanie Deng.

The Razorbacks lead host and No. 18 Michigan and Washington by two strokes and No. 5 San Jose State and No. 8 Virginia by three.

After those five teams, there’s a five-shot gap with Xavier and North Carolina, who both shot 15 of 299. The top five teams after 54 holes from each of the six NCAA regionals will make up the 30-field. teams for the NCAA Championships, scheduled for May 20-25 in Scottsdale, Arizona.

The other scores counted for Arkansas were all 3s of 74 carded by juniors Kajal Mistry and Julia Gregg and second Miriam Ayora. Freshman Ffion Tynan, from Llanharry, Wales, had a 2-under round through 16 holes after a birdie on the par 4 7th, but fired a triple bogey 6 on the next hole and a finished with a 76.

Mistry, Gregg and Ayora are tied for 23rd. Mistry, of Johannesburg, birdied his second hole with a 4 on the 11th from 507 yards but finished with four bogeys and 13 pars. Gregg, of Farmer’s Branch, Texas, had the most eventful round with three birdies, four bogeys and a double bogey in 17th place.

Ayora is tied for second on the day with 14 pars to go along with a birdie on the No. 3, a pair of bogeys and a double.

The Razorbacks are scheduled to tee off today at 8:06 a.m. on No. 1 with the Wolverines and Huskies their two closest pursuers.

Ohio State shot 16 over to tie Pepperdine and Central Florida for eighth, followed by Virginia Tech (18 over) and Oakland (32 over), who was 25 strokes off the pace.