With Piar on a road trip, the Panthers recover Blast-Off 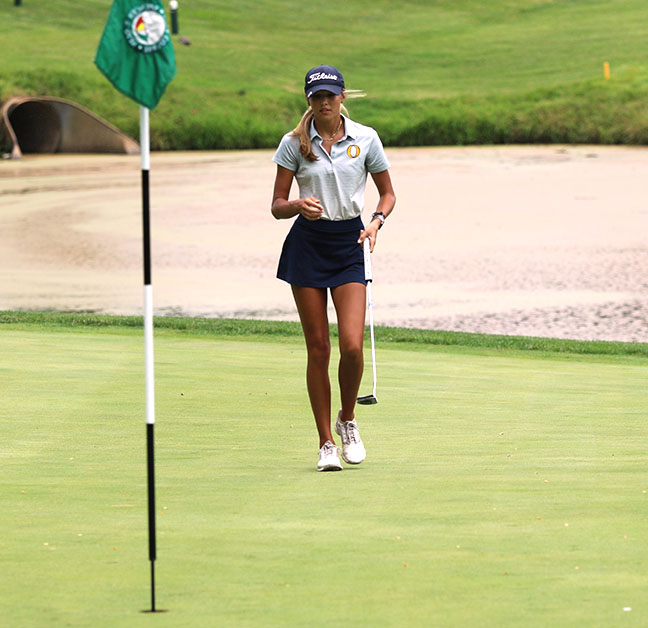 With Gracie Piar in the middle of her three-day drive to college in California, the Marquette Blast-Off Women’s Golf Tournament would crown new champions on Saturday.

O’Fallon’s Reagan Martin and Springfield SHG’s Molly Marriott shared medalist honors after they both shot a 4 on the par 76 at Spencer T. Olin Golf Course. Piar won the Blast-Off last season with a tournament record 66, with Martin second at 70.

O’Fallon, who has won the tournament in four of the last five seasons, secured a fourth-place finish from Ava Pace at 79, with Shaylee Ficken shooting 83 and Valerie Meinkoth and Caitlyn Chor shooting 85 to score in the top 16 for the Panthers.

Father McGivney Griffins placed 10th at 414 and the Alton Redbirds finished 14th at 432. Jersey, which got a 95 from Bria Tuttle, Civic Memorial and Roxana had tournament starts but did not send the four golfers needed to compete as a team.

McGivney rookie Sarah Hyten was two shots behind Martin and Marriott, placing third with a 78. Alton’s Addison Kenney was tied for eighth at 83, with Marquette’s Ava Bartosiak for 14th at 85.

Invitation Joliet –Edwardsville senior Nicole Johnson was co-medalist at 1 under par 70 and the Tigers won the tag team championship with a 310 at the 22nd Annual Joliet Invitational at Wedgewood Golf Club in Plainfield.

Lincoln-Way West’s Johnson and Kaylee Dwyer both shot 70, with Quincy’s Sophia Gold third at 71. Edwardsville rookie Rachel Johnson, Nicole’s sister, was seventh at 75, with Ali Geminn’s 79 and 86 from Alayna Garman also scoring for the Tigers.

Invite Quincy – Alton’s Alex Siatos and Sam Ottwell both shot in the top 10 to lead the Redbirds to a ninth-place finish in the 19-team Quincy Invitational at Westview Golf Course.

Springfield SHG shot 393 to win the tournament which uses five scores from each team. O’Fallon was three strokes behind at 396, with Springfield (397), Chatham Glenwood (403), Collinsville (410) and Belleville East (416) in the top six.

Alton finished at 419 with Siatos tied for fourth at 75 and Ottwell tied for eighth at 76. Cooper Hagen’s 82, Charlie Coy’s 89 and Alec Schmieder’s 97 rounded out the Redbirds’ scoring.

Edwardsville, which split teams and sent its best roster further north to play in the Warren Invite in Gurnee, came in at 445 to finish 13th at Westview. Bryce Pryor shot 81 to lead the Tigers, who scored 87 from Nathan Huddle and Kolton Wright, 93 from Cole Petersen and 97 from Luca Tausrico.