Women’s golf in India: the Bakshi sisters want to imitate the Korda sisters 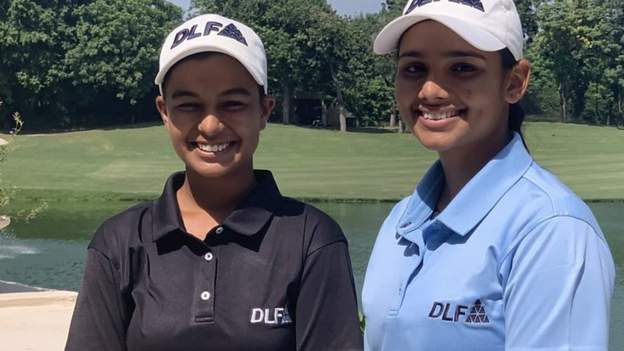 Spending too much time in a bunker isn’t normally a great start to a golfing career, but for sisters Jahanvi and Hitaashee Bakshi, it was the perfect start.

“I played in the sand for two years when I first started golfing,” says 18-year-old Hitaashee, “but then I was only six.”

Indian professionals were introduced to golf by their parents, in a country where, before 2005, there was no way for women to earn money from the game.

“At first, I was fascinated by the birds and squirrels on the course,” says Jahanvi, 19, winner of four titles on India’s National Women’s Professional Golf Tour. “Then once you win a tournament, there’s no going back. My ultimate ambition is to earn a spot in the LPGA Hall of Fame.”

Hitaashee, who also has four wins on the national circuit, and Jahanvi will be among 30 Indian players to compete this week at the Indian Women’s Open on the Ladies European Tour (LET) in Delhi – this is a crucial event for the local talent development, and was sorely missed due to cancellations due to the Covid-19 pandemic in 2020 and 2021.

The most notable performance from a local perspective was Aditi Ashok’s victory in 2016 – she was 18 at the time and held off two-time US champion Brittany Lincicome to win in one fell swoop.

Aditi now plays full-time on the US LPGA Tour and is a two-time Olympian, narrowly missing out on a bronze medal at the Tokyo Games last year.

“To see the success within your own colleagues inspires you to push forward,” says Alexandra Armas, Managing Director of the Ladies European Tour, who has seen firsthand the importance of taking golf on a global scale. .

“India has always been an interesting market for us. When we first went there, we only had one Indian member, now we have 12 on the LET, who are playing very successfully. People are so passionate about the game there.”

Aditi’s victory in 2016 is one of the links in a butterfly effect that has made women’s football grow. In 2007, at the age of nine, she visited the tournament held in Bangalore, her hometown, and then she decided that this would be her calling in life.

Tvesa Malik, who has seven top 10 finishes on the LET, said one particular golfer who came to India in 2010 paved the way for her to embark on a life of golf.

“I volunteered at the Women’s Indian Open a few years after I started playing, that was the year Laura Davies won. It was so special to be there. I had heard that she was so legendary (the Englishwoman won four majors and 87 world tournaments), she went on to win that week and became a role model for me.”

The year Aditi won, 15-year-old amateur Diksha Dagar made the cut – Diksha was inspired by local success and went on to win a tournament in South Africa in her fourth professional start.

“My phone was so messed up when I won, everyone was congratulating me,” Diksha recalled of that 2019 success.

She also participated in the Tokyo Olympics, after the help of Swede Henrik Stenson.

“He helped me with my putting, and when I qualified for the Olympics I started crying and having flashbacks of how I had struggled,” Diksha said. “It was my dream, and I want to be a big star, like PV Sindhu (the only Indian woman to win two Olympic medals) and Neeraj Chopra (Tokyo Olympic javelin champion).”

The performances of Aditi, Diksha and Tvesa have in turn inspired the new generation of national professionals, such as sisters Bakshi and Pranavi Urs, who won the Women’s Golf Association of India (WGAI) Order of Merit this year with five tournament wins.

“My long-term goal is to become world number one,” Hitaashee Bakshi says smiling, “and I would like the Bakshi sisters to become something like the Korda sisters (American players Nelly and Jessica). to think that some people think that way of us”.

Jahanvi defends the positive aspects of the national tour which has seen them grow as players and as people. “It’s the backbone of Indian golf, it made us feel comfortable in the professional environment,” she said.

“If you had told me before, ‘go play in a LET event’, I would have been shaking, but I’m glad I got to learn from the amazing players on our tour.”

These incredible players will be aiming for a life-changing week – victory at the Indian Women’s Open comes with full playing privileges on the LET for 2023, a gateway to a world of opportunity.

The opportunities now open to Indian professionals came from Champika Sayal, now General Secretary of the WGAI, who attended the World Women’s Golf Congress in 2004. Her perseverance, aided by India’s first LPGA Tour professional, Simi Mehra, finally allowed female golfers to make money in India, but the beginnings were not easy.

“I had a small budget and no marketing,” Champika recalls, “but I just wanted to make it happen. I saw golf in India as old and traditional, and I wanted to change mindsets. The first seven years were been quite humiliating, but we slowly made ourselves known.”

Simi Mehra is also part of the butterfly effect – his breakthrough on the LPGA Tour in the mid-1990s, with little financial backing or media coverage, was groundbreaking.

“I didn’t have a teacher, my mom just gave me a Ben Hogan book. In the US, I slept in my car at truck stops to save money on entrance fees,” says Mehra. “My mom said she wanted me to fail so I could come back and get married. She wanted it to be hard for me.”

These are stories from another era, but at the heart of them, in the same vein as India’s players today, is a deep determination to succeed, even when the odds are often stacked against them. As Aditi looks back on her breakthrough win in 2016, she sums it up – “I had played the Indian Open growing up, and we hadn’t seen an Indian girl win. It meant a lot to me to put my name on the trophy. Every win means a lot, but it means more.”