Zip World’s 500ft underground golf course in the Welsh Mine 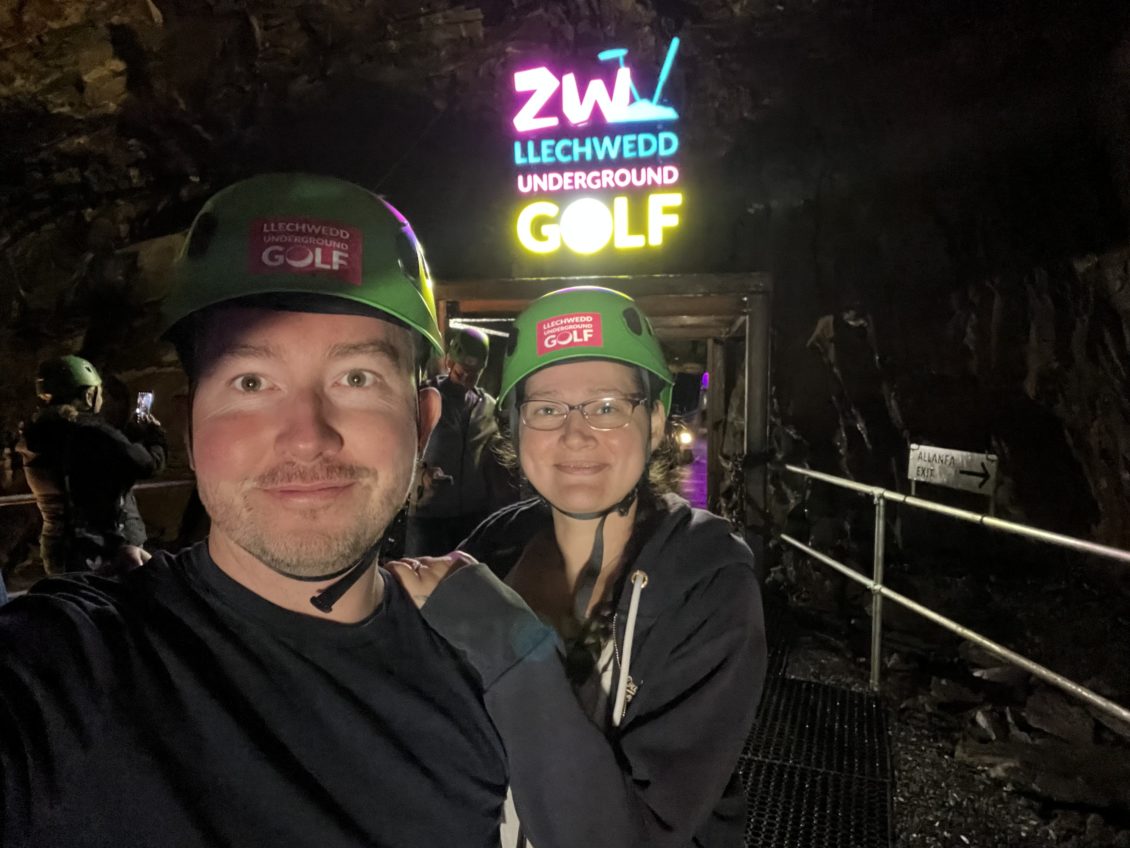 Are you a golf enthusiast or do you just prefer to do things differently? Zip World has launched a brand new underground golf course that truly brings a whole new meaning to adventure golf.

Zip World’s newest operation sits 500 feet underground at its iconic site in Llechwedd, North Wales. It’s the first of its kind in the world, set in a disused mining cavern and completely unlike anything you may have experienced before.

Finding the Zip World Llechwedd site couldn’t be easier. It is signposted and the sat nav postcode (LL41 3NB) provided will take you directly to the entrance.

Depending on how busy, you may be directed to upper-level car parks, which offer spectacular views of the surrounding slate quarries. You can also see people racing above you on the world’s fastest zip line – if you like that too!

Knowing that they had several dining options available, we arrived a little over an hour before our activity time, which gave us plenty of time to grab a bite to eat and use the facilities.

There was plenty of seating outside and inside, including picnic benches, which was sufficient even at the busiest times. I’m sure you would also be welcome to bring your own food if you wish.

The staff were very welcoming and if like us you have never been to Zip World Leckwedd before they will explain everything and answer any questions you may have.

Before starting your descent, you receive a brief safety briefing on the activity. This is the first time I have had to wear a helmet to play golf, but if you remember, there is no ordinary course.

To get to the golf course, you will take a cable car 500 feet underground. The Zip World cable car is actually the steepest in Europe, and if you are lucky enough to sit in one of the upper parts of the train, you will have a view of the tunnel as the daylight slowly disappears.

Each compartment of the railway can only hold 6 people, which was enough for the group we were in at our time. It can obviously get a bit snug, but that wasn’t a problem.

Before visiting, I strongly recommend that you pay close attention to the footwear and clothing suggestions made by Zip World. It was such a beautiful hot day; it was hard enough to wear jeans and a decent pair of boots. What I left was my sweater, so I was just in a t-shirt. It was quite cold underground (around 7°C) and although I could live without it while playing, waiting for the train back to the surface (around 15 minutes of waiting) was a bit too far. If I go back, I’ll listen to Zip World’s advice and go with my arms covered…

Once underground, you make your way through some of the most beautiful caverns until you reach the course. It’s a short walk with water drops (at this point I realized the t-shirt wasn’t the best idea). However, the caverns are illuminated with colorful lighting, which makes it truly breathtaking.

Once we got to the starting point, which looks more like a mining outpost – which was cool! You will be greeted by a guy from Zip World who will provide you with a putter and a golf ball.

The course itself is 18 holes over 4 courses, providing a variety of challenges for participants. I guess what was a bit off-putting (no pun intended) was the darkness (although it’s very atmospherically lit) which can make it difficult to see your ball. I have to say that I usually wear glasses (strike 1) and was mesmerized by the cavern (strike 2) so that’s my excuses for not doing very well. Oh, I also let my partner win (strike 3), of course I did.

Each of the holes offered various challenges, as I mentioned, and most of which incorporated old mining memories.

What was nice and unexpected was that a lot of the old mining equipment was brought into the game, so they weren’t just there for aesthetics, they were also operational.

The simple-looking hole has attracted many people. You can see why one of the rules was to have no more than 6 moves before moving on, as this brought a few groups together.

Once you reach the fourth floor of the course, you have the option of descending the stairs to the last two holes…or taking another form of transportation.

At the top, you can choose to slide down a steep but exhilarating slide. I can’t remember anyone who hasn’t tried…and some kids (and adults) have decided to do it multiple times.

The last hole (number 18) is brilliant. I can’t think of a better way to end the game than trying to get the ball into what looked like a miniature mine shaft. You were obviously forgiven if you spent a little more time on this one…

Whether you love adventure or crazy golf, I can’t think of a better challenge for you. It’s completely different and being a world first, you won’t get the experience anywhere else.

What I would say is that if you are traveling to Zip World and don’t live there, I would recommend combining it with at least one other of their activities to make it worthwhile. With so much to do in Llechwedd and the other locations near Zip World, you really can make this an adventurous holiday.

Book your tickets and start your adventure here: https://www.zipworld.co.uk/adventure/underground-golf