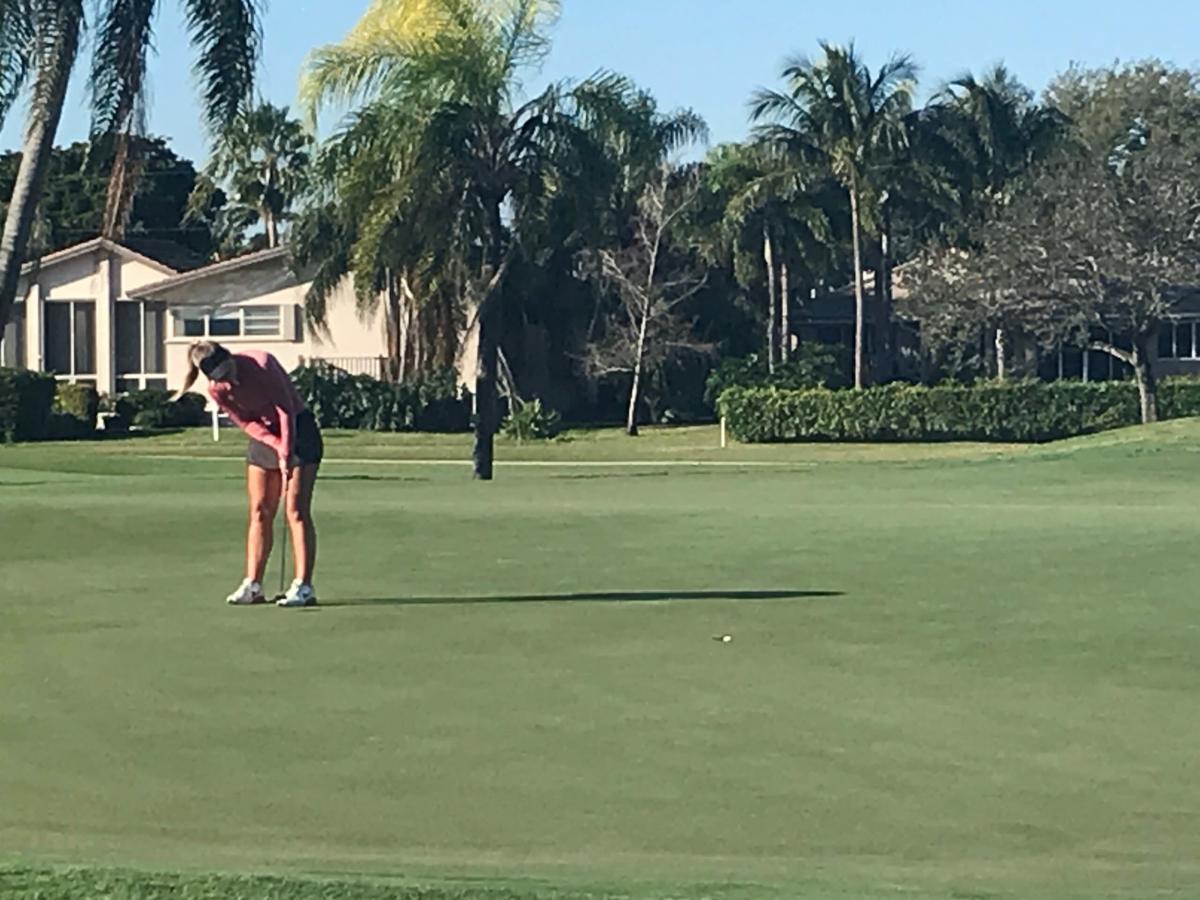 FORT LAUDERDALE, Fla. — Brooke Oberparleiter and Kim Keyer-Scott saved their best golf for last as they both won their respective division titles at the 89th Ione D. Jones/Doherty Women’s Amateur Championship on a Friday morning cool and breezy at Coral Ridge Country Club.

Oberparleiter defeated reigning Amateur Division Champion Alexa Pano 2. It was the first time the 16-year-old, who spends the winters in Jupiter and the rest of the year in Blackwood, NJ, has competed in the event, whose past winners include current LPGA Tour pros Charley Hull and Lexi Thompson, as well as former pros JoAnne Carner, Michelle McGann, Natalie Gulbis and Vicki Goetze.

“It was definitely one of the best rounds I’ve ever played in my life, and that’s what I needed today, so it came at the right time for sure,” said Oberparleiter, who started playing tournament golf when she was “11 or 12” and whose only previous victory was last summer in an American Junior Golf Association tournament.

“I’m so honored to even make the final, and winning the event is huge for me,” said Oberparleiter, who thanked his swing coach, Jeff Leishman, who teaches Dye Preserve at Jupiter, for taking his game to the next level.

“I will be back 100% next year. It’s a great tournament, it went very well and the course was in great condition. The greens were just amazing.

After halving the first hole with Pano, who was seeking his third consecutive Doherty title and fourth overall, Oberparleiter lost the second hole with a bogey and halved the third. She then birdied the fourth, halved the fifth with a birdie and went up 1 with a birdie in the sixth.

“The first two holes I was really nervous, but then I decided to calm down and that’s when the birdies started coming,” Oberparleiter said.

The game came back to zero when Oberparleiter bogeyed the seventh, she halved the eighth, then she birdied the ninth to come back to 1 place.

“Coming into 17, I really felt it,” Oberparleiter said of his nerves. “I just tried to relax and take a few deep breaths and hit the driver like I’ve been hitting him all day.”

She and Pano had good drives on the 17th, reached the green in regulation time and had two putts for pars. On the 18th, after Pano hit his 90-yard approach to the front of the green, Oberparleiter put in a 58-degree wedge 75 yards nine feet from the pin.

Faced with a tricky uphill-downputt from over 20 feet away, as soon as Pano stroked her birdie attempt, she knew it was wrong and she walked over to Oberparleiter and conceded the hole.

“Today was obviously quite frustrating,” said Pano, 17, of Lake Worth, who will start playing the Symetra LPGA Developmental Tour as an amateur in late February and play in the Augusta National Women’s Amateur in late March.

“I hit 16 greens, made a few birdies. I probably played pretty well, but I didn’t putt enough to win. They weren’t falling off and that’s something I’m really not used to. Usually my putting is one of my biggest strengths.

“I left the door wide open for him.”

Both Keyer-Scott and Curtin were competing for the first time in the most prestigious tournament for female amateurs 50 and over, except for the US Senior Women’s Amateur.

“I played well,” said Keyer-Scott, who was 3-under for his 15 holes. She won the first hole with a par and the second with a birdie, halved the third, won the fourth, halved the fifth and birdied the sixth to make it 4. I got up, all I was doing was trying to get to the greens and get him to putts. She almost made a few putts, unfortunately she hit a lot of edges.

After halving 10 and 11, Keyer-Scott won 12 with a par of two putts to come back to 3. After two more halves, she ended the match with a birdie at 15.

It was a significant victory for Keyer-Scott, who won the Senior Women’s Amateur Open and the Florida State Golf Association Senior Women’s Open last year.

“It’s as good as any,” said Keyer-Scott, who didn’t start golfing until she was 30, went to college at 34 and was a four-time All-Star. American Division II at Northern Kentucky University. as well as the National Freshman of the Year. “It’s a very nice course, friendly staff… it’s really nice to be appreciated.”